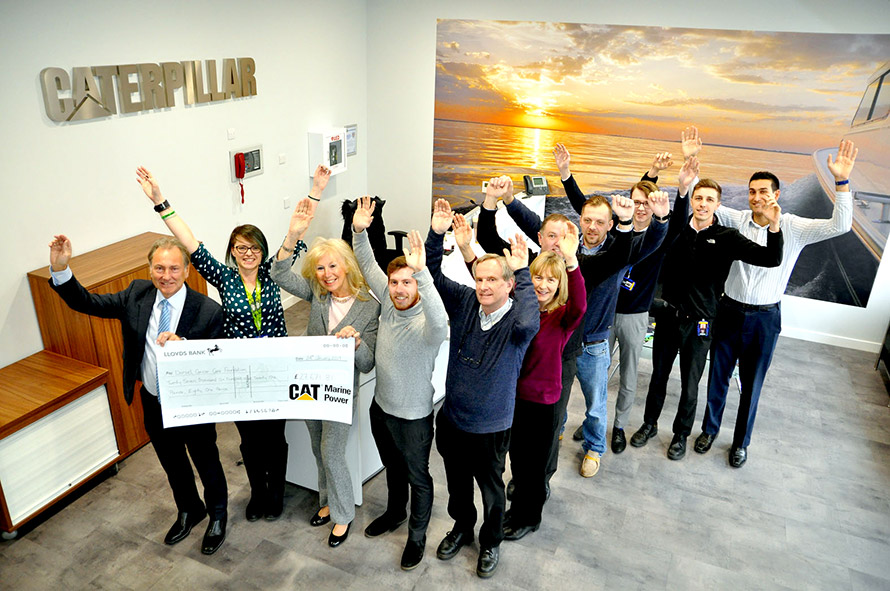 WHEN staff at Caterpillar Marine Power UK Ltd in Ferndown pledged to support a local cancer charity, they had no idea of just how far they would go.

Four years on they have run marathons, biked, bowled, pulled a 35,000kg aeroplane along a runway and even lost hair – raising almost £30,000 for Dorset Cancer Care Foundation (DCCF) in the process.

The fundraisers unveiled their final, fundraising total of £27,671.81 in a special presentation to DCCF founder Eve Went and Chairman Chris Thomas.

Jude Castell, who has led the fundraising throughout and even shaved her head for DCCF said: “When we first heard about the charity we knew we wanted to do something, but none of us ever dreamed how passionate we would become about it.”

She continued: “We have done some incredibly exciting things together and as well as giving us a great deal of satisfaction to know we are helping others, I think this has also made us a stronger team.”

Caterpillar Marine Power UK Ltd is a division of the global brand Caterpillar.

The company, based at Ferndown Industrial Estate is the leading manufacturer of marine generators and propulsion engines.

Jude continued: “One of the highlights for me was meeting someone with cancer who had actually been helped as a direct result of our fundraising.”

Jude met Steve Jewell, a self-employed plumber from Broadstone, who was struggling to pay his mortgage while going through cancer treatment.

“I’m not ashamed to say I was moved to tears when he told me how our fundraising had helped his family through some very dark times,” said Jude.

Dorset Cancer Care Foundation was set up in 2012 and gives grants to families experiencing financial struggles because of cancer.

The charity’s co-founder Eve Went said: “The Caterpillar team came to us in 2014 as fundraisers and they have gone on to become much-loved friends.

“Their devotion is incredible, and the team – and their employers who have kindly match funded some of their fundraising – have made a huge impact on families affected by cancer here in Dorset.”

DCCF, whose patrons include AFC Bournemouth Chairman Jeff Mostyn and Harry Redknapp, is currently running the High Five Appeal, which asks people to donate a fiver by texting DCCF00 £5 to 70070.

You can also donate online at: https://www.justgiving.com

DCCF would also like to hear from Dorset cancer patients who might need its support. An application is simple and if successful, financial help is available very quickly. Details of how to apply for grants and become a supporter of DCCF can be found here.