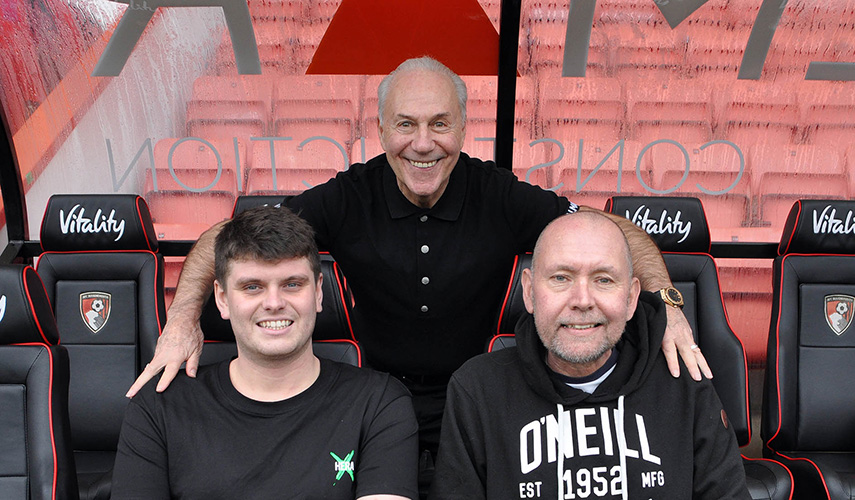 Cherries Chairman Jeff Mostyn invited Connor and Nick Way to the Vitality Stadium, after learning of their efforts to help his local cancer charity.

Jeff is a Patron of Dorset Cancer Care Foundation (DCCF), which gives financial help to Dorset based families affected by cancer.

He welcomed Nick from Poole and his son Connor from Broadstone to AFC Bournemouth after learning how the family is raising money for DCCF, despite fighting their own cancer battle.

Nick, a former self-employed painter and decorator, was diagnosed with esophageal (gullet) cancer in 2019.

DCCF helped him and his wife Carol pay their mortgage, while Nick was undergoing treatment.

Sadly, Nick’s cancer has spread to his liver and neck, and he is now undergoing gruelling, palliative chemotherapy and intensive drug therapy to prolong his life.

Nick’s son Connor, 25, said: “Learning your dad has cancer is devastating and you feel so helpless and desperate to do something – anything really – to help.

“When I saw how DCCF took some of the stress away from Dad I wanted to show my appreciation, so shortly before my birthday this year I set up a Just Giving page and asked my family and friends to consider donating to DCCF, instead of buying me anything.”

The Senior Specialist Buildings Claims Consultant for LV in Poole, continued:  “To tell you the truth I thought I’d raise around £100 – and that would have been great. But word spread to friends of friends and the total just kept growing every day until it topped £687.00.

“I was amazed and Dad was really touched.

“It’s really nice to know that there are so many people out there who want to help.”

Jeff gave Nick and Connor a tour of the players’ changing rooms, the Press Room and also pitch side where they sat in the dug-out.

He said: “Hearing about Nick’s ongoing battle with cancer and how he and his wonderful family are thinking about others while going through such hard times, was utterly humbling for me.

“Meeting them and showing them around the stadium was an absolute privilege.”

Nick said: “I’m very proud of Connor and grateful to everyone who donated to his fundraising page.

“DCCF has been a real help to us financially and it’s great to know that the money my son has raised will now be going straight to another family, here in Dorset, who really need it.

“We’d also like to say a big thank you to Jeff for inviting us down to the stadium. We’ve always been supporters of the Cherries and it’s been fascinating to see behind the scenes.”

Dorset Cancer Care Foundation (DCCF) grants can be used to pay for anything from housing and transport costs to specialist equipment and short breaks.

For more information on how to apply, on how to fundraise for the charity, or to join in one of its events in 2020 please click here.