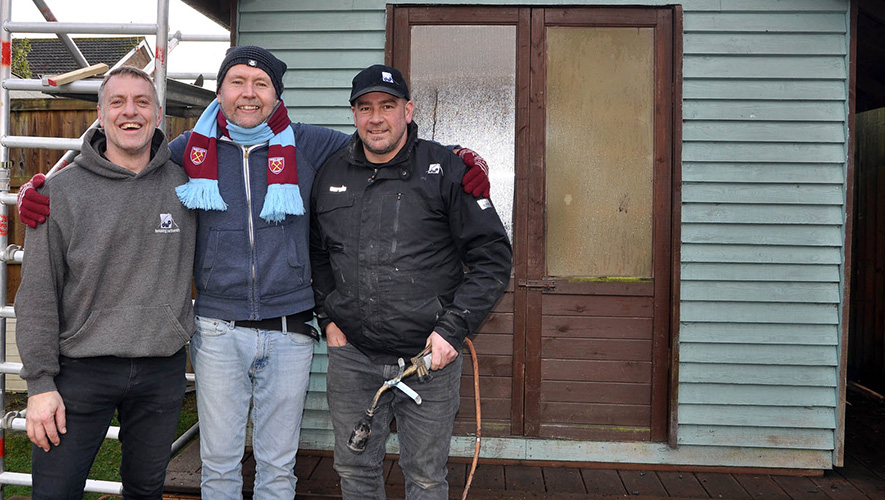 Staff from DWP Housing Partnership interrupted their busy maintenance schedules to mend the shed roof of a Poole cancer patient.

DWP’s Leon Stimpson and Ben Denney spent three hours re-felting the roof of Nick Way’s summerhouse in Verity Crescent for free, after learning he was too poorly to do the job himself.

Nick, a former painter and decorator, was diagnosed with esophageal (gullet) cancer earlier this year after experiencing difficulty swallowing.

He and his fiancée Carol brought their planned wedding forward before Nick underwent surgery.

The operation was thought to have been a success.

However in September, the couple were devastated to learn the cancer has spread to Nick’s liver and neck.

He has been wearing a fixed neck and chest brace ever since and is now having palliative chemotherapy and intensive drug therapy in a bid to slow the disease and extend his life.

Leon, a manager with DWP, said: “We heard about Nick through Dorset Cancer Care Foundation.

“The charity has been helping the Ways because Carol has had to give up work and care for Nick.

“We were really sad to hear about what they have been through and how Nick was struggling with being able to do some of the things he would normally do around the house.”

Ben added: “Nick’s story really had an impact on us because like him, we work with our hands and just take it for granted that we can get on and do things.

“When we heard his shed had been damaged in the recent bad weather we came down to see him, sourced the best quality materials and fixed it for him – it’s been a real pleasure to meet him and Carol and do this for them.”

“They’re done a great job and to top it all off they tell me that DWP won’t take a penny from me.”

The dad of two added: “I don’t want to sound morbid, but I don’t know how much time I have left. So I have been putting a lot of effort into making sure the house is in good order for Carol, my children and three step-children.

“A shed roof may not sound a big thing, but it is frankly one less thing for Carol to worry about and it’s a weight off my mind.

“The guys have also made me laugh and really raised my spirits today and for that I am truly thankful.”

The Marriot Hotel in Bournemouth – a supporter of DCCF – has also gifted Nick and Carol a night’s stay between Christmas and New Year.

Dorset Cancer Care Foundation (DCCF) is a charity which offers financial assistance to cancer patients and their families in Dorset.

Grants from DCCF can be used to pay for anything from housing costs to specialist equipment and short breaks.

For more information, to fundraise for the charity, or join in one if its events in 2020 please click here

DWP Housing Partnership is a landlord and developer headquartered in Boscombe, Dorset, and has around 3,000 tenants across Dorset and Hampshire. It is committed to building affordable accommodation.