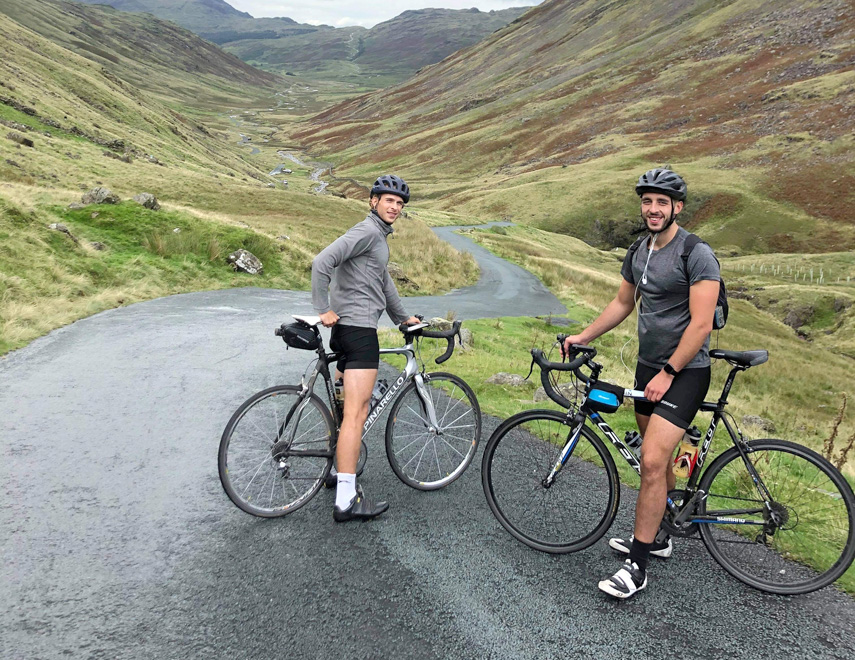 The friends, both 24 and from Southbourne, had planned to spend six days in August cycling 700km to the Netherlands to raise funds for Dorset Cancer Care Foundation (DCCF).

But travel restrictions around the pandemic ruled out crossing France, forcing them to completely rethink their plans.

Determined not to be beaten, Joe and Natty swapped their mainly flat route through France for the much steeper terrain of the Lake District, via Cheltenham, Stoke and Lancaster.

Almost 700km later and having scaled 5,500m – almost the equivalent height of Mount Kilimanjaro – the duo has raised just over £2000 for Dorset cancer patients.

Joe said: “We were absolutely gutted when the restrictions came in and we found out we weren’t going to be able to get to the Netherlands. But we didn’t want to let the charity down.”

Joe currently lives in the Netherlands where he is studying to become a physiotherapist. He spent the summer working with Natty as an ambulance care assistant for patient transport in Bournemouth.

He continued: “A friend had told us about the work of DCCF, a small charity which helps local people who are struggling financially because of cancer and we decided we wanted to help too in any way we could.

“Once the Netherlands was off the table we just looked at a map of the UK to find a way to meet the challenge closer to home and plotted a course to the Lake District.”

After booking accommodation en route and with only the equipment they could carry on their bikes, the boys set off.

Natty said: “It was really tough. There was so much hilly terrain on our route and each day we basically found our accommodation and collapsed into our beds.”

He continued: “We had a few minor falls and the weather was atrocious at times.

“But we really spurred each other on and completing the ride brought a huge sense of achievement for us both.”

“The staff of the bike shop Renovatio in Boscombe were also a huge help to us,” Joe continued, “advising us on repairs and other issues we had along the way. And we have since learned that the money we raised has already been donated to a young female cancer patient who will be using it to pay for her travel costs for treatment.

“This makes us feel immensely proud.”

Chris Thomas, Chairman of DCCF, said: “When Joe and Natty first told us what they were planning we were full of admiration and gratitude. The last few months have been a real battle for the charity.

“Then, when their plans looked to be scuppered but they said they were going to complete the challenge anyway, we were pretty much bowled over.

“These two young men have spent the summer transporting NHS patients to and from hospital and have used their time off to complete an epic ride for people suffering from cancer here in Dorset.

“They deserve all our admiration and we hope they will now inspire other young people to come forward and help DCCF too.”