Po the panda has found a home! 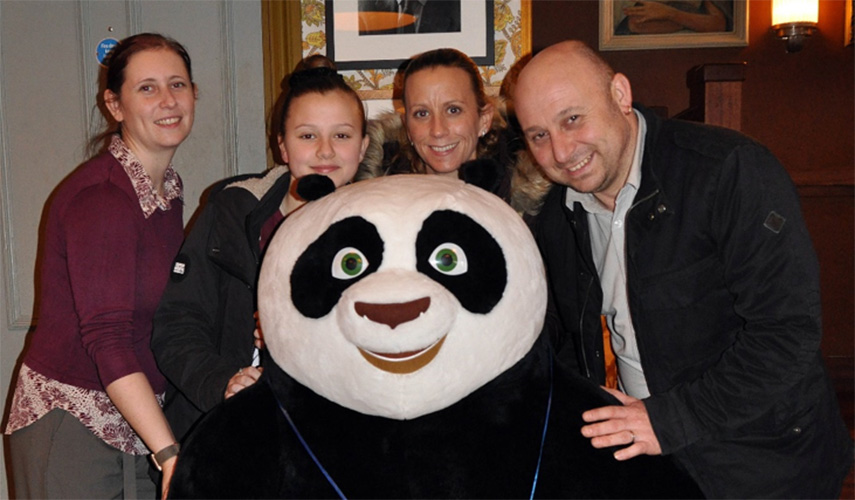 KUNG-FU-TASTIC – Simon Crook (right) is the winner of the DCCF panda auction. He is seen here with Debbie Chalk of Delfino Lounge, Poole (left), his daughter Georgia and his wife Sarah

The winner of our giant cuddly panda auction is Mr Simon Crook from Dorchester – to the utter astonishment of his family!
Simon spotted the wonderful ‘Po’ while enjoying a rest from shopping at Delfino Lounge in Poole, at the end of December.
Debbie Chalk, one of the café’s owners had kindly housed the panda for DCCF after it was donated to us by her aunt’s care home, Two Cedars in Broadstone.

People were invited to bid for the chance to own Po (a character from the children’s film Kung Fu Panda) – and Simon’s bid of £175 was the ‘best bear none’.

Debbie said: “We have really enjoyed looking after Po. He has been a huge draw and he has been in literally hundreds of customer selfies, but it’s lovely to know he has a new home. He’s going to leave a big space when he leaves – in every sense!”

Simon and his family own G. Crook & Sons, a plant hire company in Dorchester.

He said: “My sister Sarah died of cancer at quite a young age and when I read the notice on the panda saying it was raising money for people with cancer through DCCF I was glad to put in a bid.

“To tell you the truth I forgot I had done it and the first thing Georgia and my wife Sarah knew about it at all was when I received a text saying we’d won!”

Georgia, 14, said: “It’s huge. I remember seeing it when we came in at Christmas, but I can’t believe Dad bid on it and it’s now ours.”
Simon’s somewhat-shocked wife Sarah agreed: “I wasn’t expecting it to be quite so big… But it is lovely.

“And it’s great to know we are helping DCCF to help families with cancer in Dorset.

“I think we’ll keep him in the lounge!”