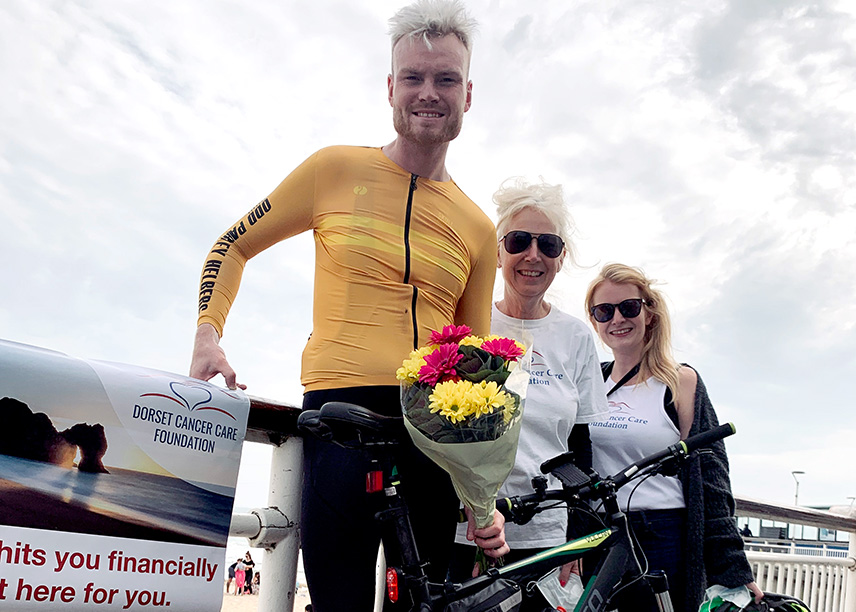 But the 26-year-old rode from Bracknell, Berkshire, to Bournemouth Pier, in just 10 hours, raising more than £6k for Dorset Cancer Care Foundation (DCCF).

Chris set out from Oaktree Garden Centre in Bracknell where he is a Director, on September 19th.

He was joined on the ride by seven workmates, all cycling for different charities.

He said: “When I decided to tackle the ride for DCCF I always knew it would be difficult; I like cycling and I’m fit, but I’m not what you would call a seasoned cyclist by any stretch of the imagination.

“Even so, I wasn’t prepared for just how incredibly tough it would be on my body.”

He continued: “When I reached the New Forest I was so tired I honestly thought I would have to throw the towel in. But I’m not a quitter and I thought about my mum and my late grandad and just kept going.”

Chris’s family who live in Bournemouth, are huge supporters of DCCF.

The charity gives help to Dorset people who are struggling financially as they battle cancer.

Chris said: “My mum has had cancer and my grandfather died from the disease.

“DCCF is helping people every week, paying for things like transport to hospital appointments, household bills and much needed short breaks.

“Knowing I have raised £6,300, which will help even more people in Dorset who really need it, makes all the hard work and agony worthwhile!”

Meryl Ponsford a trustee of DCCF, said: “We are full of admiration for what Chris has achieved and so grateful for this fantastic amount of money which will make a real difference to local cancer patients’ lives.”

Chris can still be sponsored in his challenge at: https://www.justgiving.com/fundraising/chris-helberg2