Running for the local charity which helped us through cancer 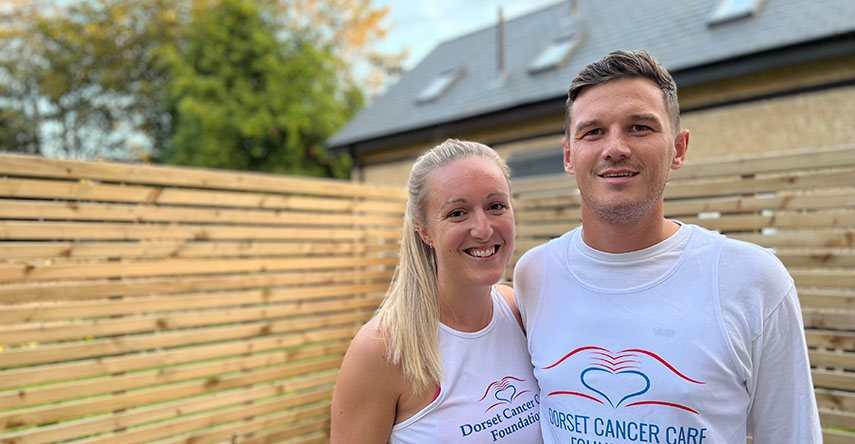 Joe Murgatroyd and his partner Lily Stickland are running the Bournemouth Half Marathon for Dorset Cancer Care Foundation (DCCF) after the local charity stepped in to support them financially during Joe’s cancer treatment.

A 31-year-old Bournemouth man who has come through cancer will be amongst the runners in this weekend’s Bournemouth Half Marathon.

In 2019, Joe Murgatroyd was just about to start training for a new career when he received the shattering news that he had testicular cancer.

Joe explained: “I went to my GP after feeling a lump. I didn’t think much would come of it but after scans and blood tests I was told I had testicular cancer, which was obviously a huge shock to my partner Lily and I.”

Joe was about to start training as an Air Traffic Controller.

He had no choice but to defer the start date of his new job and faced his treatment with no income.

“We were relying on Lily’s salary as a primary school teacher to pay the bills and it just wasn’t enough,” he said.

“To be honest I think I was more stressed at that time by our financial predicament than my diagnosis.”

Joe underwent surgery but unfortunately the cancer had already spread to his abdomen and an intensive course of chemo was needed.

He said: “We were struggling but Lily had heard about the work of Dorset Cancer Care Foundation (DCCF). A Poole-based charity which fundraises to provide cash grants for Dorset people living with cancer.

“We applied for a grant and were so relieved when DCCF was able to offer us support. This eased the financial pressure we were under and enabled me to focus on getting better.”

Joe went on to receive the all-clear in June 2019. But in December that year he was told the cancer had come back and underwent further chemo.

He said: “I received the all-clear again in April 2020 and thankfully remain in remission today, 18 months later.

“Lily and I have stayed in touch with the great people at DCCF and it has been good to feel a part of a community of people with relatable situations. We have also attended some of their fundraising events.

“The whole team have been so accommodating and caring from the moment I got in touch. The help that we received from DCCF gave us one less thing to worry about during a really tough time.”

The couple are running the Bournemouth Half for DCCF because they would like the same support to continue being available to others.

“We know that like many charities, DCCF is going through a difficult time as a result of the pandemic, so we want to help in any small way we can,” said Joe.

“Lily ran the Bournemouth Marathon (also for DCCF) in 2019 so this one should be a walk in the park for her. I have run a half before, although I was younger and fitter then! So, I am looking forward to getting it done!”

He added: “I would 100% recommend people who are diagnosed with cancer to contact DCCF, whether they are in financial difficulty as a result of their diagnosis, or if they just need someone to chat things through with.

“There are many cancer charities doing fantastic work, but DCCF was there to help in such a tangible way when it was really needed.”

DCCF will pay the registration for anyone interested in running for them in the 2022 Bournemouth Marathon Festival. Simply visit https://www.runbournemouth.com/ when registration opens and choose Dorset Cancer Care Foundation as your chosen charity.

All money raised by the charity goes straight to Dorset families struggling financially as a result of a cancer diagnosis.