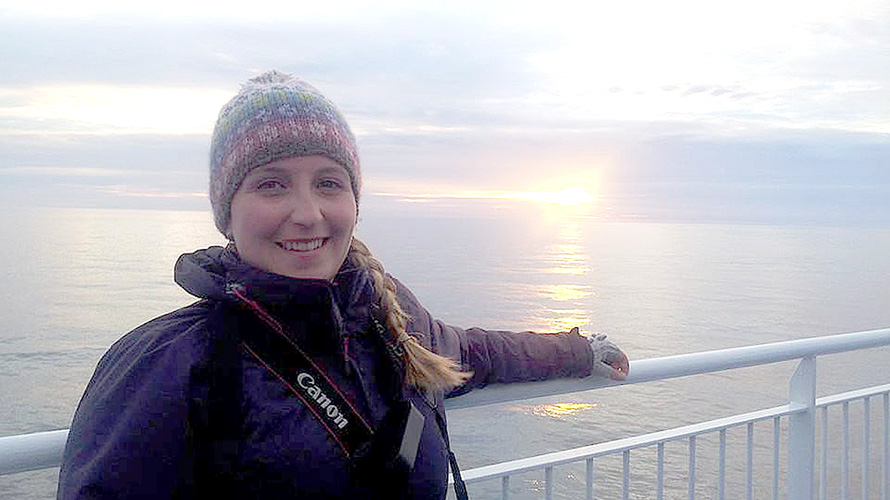 A 30-year-old woman who learned she had cervical cancer just weeks before she was due to start her “dream job” told how a local charity has helped soften the blow.

She had recently handed in her notice as a Heathland Warden for the Borough of Poole to embark on a thrilling new role as a marine wildlife guide on cruise ships and was due to join a vessel bound for the Caribbean on January 4.

Hazel said: “When a consultant oncologist at Poole Hospital told me I had cancer it was like a tonne of bricks had been dropped on me”.

“Six months before, in May, I had gone to my GP after having a massive bleed

“I was told it was probably endometriosis and that it was normal to bleed between periods. But it wasn’t normal for me and I knew something wasn’t right.

“A few months later I went back again to say I was still concerned. I was referred to Poole Hospital for blood tests and an internal examination after which I was told it was probably nothing to worry about, but they could see “something”.”

From there Hazel was sent for a CT scan. This led to an MRI and very quickly a PET scan, for which she was told to take someone with her.

“Looking back, I was being prepared for the worst,” she said.

Hazel had been living with and helping to care for her elderly grandfather, but moved back in with her parents and younger siblings during her gruelling, daily treatment.

She underwent 25 sessions of external pelvic radiotherapy, three brachytherapy sessions (internal radiotherapy) and four lots of chemotherapy. Treatment began in December and finished at the end of January, including sessions in hospital on Christmas Eve and New Year’s Eve.

She said: “While I was having the treatment I felt strangely driven – something was being done to get rid of the cancer which brought me relief. But when treatment stopped and I was told I’d have a follow up appointment in nine weeks I felt left in a sort of anxious limbo.

“The raft of support and wave of activity that carries you along ends and then reality of what you’ve been through sinks in. It was at this point I began to worry how I was going to cope with no job.

“The cancer thankfully hasn’t spread and I am extremely thankful for that. I’m also very lucky I didn’t lose my waist length hair, but I am now going through early onset menopause.

“Because I had handed in my notice and was unable to take up my new position, I had no money and no sick pay – I started to feel very concerned.”

Its grants can pay for household bills, equipment and even short breaks following treatment.

“I contacted DCCF and was so grateful when they gave me a grant,” said Hazel.

“It really made such a huge difference to me.

“Just being able to put some fuel in my car to travel to local nature reserves for walks is wonderful.

“I am desperate to get back to the work I love; I am doing everything I can to aid my recovery so I can get well and realise my dreams,” she continued.

“The side effects have been hard at times, but I am grateful to have received this life-saving treatment.

“I have committed to wildlife guiding on my first cruise in June.

“I am determined to be out at sea helping passengers to spot whales and dolphins this summer!”

DCCF, whose patrons include AFC Bournemouth Chairman Jeff Mostyn and Harry Redknapp, is currently running the High Five Appeal, which asks people to donate a fiver by texting DCCF00 £5 to 70070.

You can also donate online at: https://www.justgiving.com